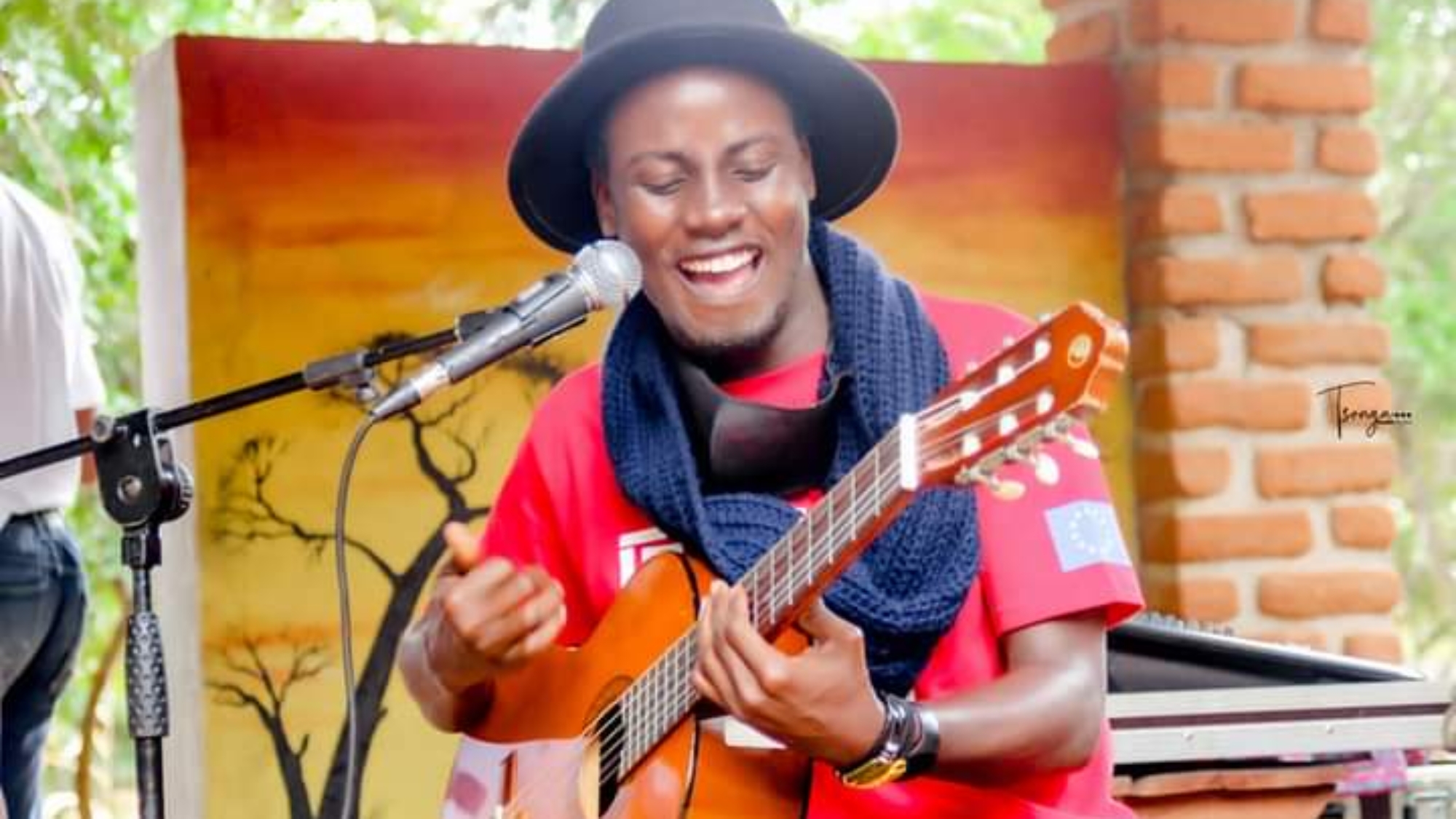 “I aspire to inspire before I expire,” is the mantra that 25-year-old Andereya Baguma lives by. Having grown up in Kamwokya-Kifumbira, a low-income neighbourhood in the city of Kampala, he has made it his life’s purpose to inspire children from similar backgrounds through music. Inspired by African icons like Uganda’s soul musician Maurice Kirya, Late Zimbabwean musician Oliver Mutukudzi, Cameroonian-born vocalist Richard Bona and Nigeria’s Asa, Baguma went on to specialise in the genres of Afro-Soul where he sings about various human experiences and social issues.

Further encouraged by his mother, Baguma went on to pursue music at the University, earning himself a bachelor’s degree in Music Dance and Drama.

Since then, Baguma has been a full-time artist with no significant challenges coming his way until the lockdown enforced by the government to combat the second wave of the COVID-19 pandemic.

Baguma says that while the lockdown has given many artists time to pause and reflect on their craft, create more art and upgrade their skills, it has also been a tough time financially.

“At the end of the day, you wonder, who am I going to perform for? There is no audience because there is no chance to perform,” Baguma says.

In the end, he observes that this breaks an artist not just financially but also emotionally.

Baguma, like all other Ugandans, is going through a second lockdown and he says that, unlike the first lockdown, he feels a bit more mentally prepared this time. To cope financially, he is taking advantage of his academic background that gave him a couple of skills. At the moment he is surviving on projects that pertain to music and theatre.

He hopes that society, the private and public sector can support artists through financial support or provision of platforms where they can perform their art. He also hopes that various institutions can support artists by introducing them to alternative skills that can enable them to earn a living during this time.

The creative economy consists of advertising, architecture, art and craft, design, fashion, film, music, photography, performing arts, publishing, research, computer games, television and radio among other things. All these sub-sectors combined with trade, labor and production create diverse streams of revenue not just for the people but for the country as a nation. According to the United Nations Conference on Trade and Development (UNCTAD), the creative industry which employs 30 million people globally and mostly youths, has dealt a huge blow because of the pandemic.

Its report further indicates that in 2020, statistics showed the cancellation of public performances alone cost authors roughly 30 per cent of global royalties while the global film industry lost $7 billion in revenues.

Mbabazi is a young woman ekking a living and making her social impact through art, in the industry of fashion design and acrylic painting. Even though she is pursuing a bachelor’s degree in international trade and economics, she has been working as a full-time artist for the last five years.

Regarding the lockdown, she feels that this lockdown is worse for her as an artist than the previous one. This is because of the regression in plans and investments made on an artist’s part. She is making efforts to survive through this period by producing more art but even the stress of the lockdown affects her creativity.

On the financial aspect of the trade, she speaks of the obviously plummeting sales. Under the circumstances, a lockdown changes people’s priorities, as they redirect their finances to satisfying basic necessities like food as opposed to entertainment.

Right now, she is getting by with the support from her family. However, she feels that perhaps, artists would not be facing such a crisis if society regarded their art differently.

“Society does not recognise art as a lucrative skill but rather as entertainment. They get entertained and they forget the time and commitment that goes into this work from the artist,” Mbabazi says.

She hopes that one day, this attitude will change. When it comes to financial assistance, she hopes that artists would be considered for loans and grants, the same way that someone else carrying out the traditional forms of work or businesses are considered.

In a positive turn of events, she was surprised by a move from Kampala based MoTIV that seeks to light the path for creatives and makers.

“MoTIV actually surprised me by coming out to ask artists during the lockdown to submit their work to one of their online platforms. When someone buys the work the artist gets paid. I believe this move from MoTIV was an understanding of the struggle of the artist during this period,” she says. Her assumption is not far from the truth.

MoTIV is home to 747 creatives currently. The Marketplace Lead at MoTIV, Nick Spencer expresses empathy for the creatives during this period.

“Creatives have been devastated by the lockdown. They lack materials and are unable to access the market. This is compounded by the psychological pressure of living through the pandemic,” Spencer says.

“One of the biggest problems that the creatives continuously face is the feeling of uncertainty and stress coming from the effects of the lockdown,” Spencer says before adding, “MoTIV is aware of this and has put in place weekly webinars that serve the purpose of a regular check-in with the creatives to keep their motivation afloat.”

Other creatives including musicians have attempted using online platforms to remain in touch with audiences but even that is not done at the desired level given a number of factors such as high cost of internet and small audiences. Throughout the lockdown, the Ugandan media has been awash with conversations on the stimulation funds that the government promised to vulnerable people.

To address Mbabazi’s concern about the eligibility of artists for these funds, the Communication Officer at the Ministry of Gender, Labour and Social Development, Frank Mugabi assures creatives that they are not outside of the consideration for workers.

“Workers in the creative economy are part of the category of beneficiaries that the government of Uganda is targeting with the Shs100,000 COVID-19 Relief cash transfer per person. So far, we have supported 3,557 DJs, 5,281 artists, comedians, musicians  and 3,222 bouncers,” he explains.

Mugabi further adds that other programmes like the Youth Livelihood Programme (YLP), Uganda Women Entrepreneurship Programme (UWEP), Youth Venture Capital, Emyooga, Operation Wealth Creation among others exist as alternatives to youth who are working in every industry.

“Youths can apply for funding from those programmes through their nearest Division or Sub-county offices,” he advises.

Besides the public and private sector, The United Nations Educational Scientific and Cultural Organization (UNESCO) also recognises the effect of the pandemic on freelancers or gig workers, who make up a large segment of the sector’s labour force.

In 2020, UNESCO established an initiative called ResiliArt, a global movement aiming to strengthen the resilience of artists and cultural professionals in the face of the enormous challenges posed by the current health crisis. Through ResiliArt, UNESCO brings together Ugandan artists to accomplish three objectives.

The first one is to raise awareness about the impact of COVID-19 on the culture sector and the livelihoods of culture professionals.

The second objective is to give visibility to artists worldwide, renowned or unknown and to ensure their voices are heard at the policy level to address existing gaps and needs.

Lastly, through ResiliArt UNESCO intends to raise awareness to contribute to the decision-making processes of member states during the development of policies and financial mechanisms aimed at empowering artists.

To date, UNESCO has managed to conduct 270 debates globally with Uganda as one of the countries in which these debates are occuring. UNESCO intends to continue advocating for the joint support of creatives through policies and institutions.

As the pandemic goes on, it’s only joint efforts such as these across the  globe, in the private and public sectors that can enable the survival of the creative industry in Uganda on which many Ugandans depend for their livelihood.